Ancient. This week at BU we had an incredible visit from the Martha Graham Dance company. Artistic director, Janet Eilber, lectured on Martha Graham‘s innovations in dance, showing clips of past productions, as well as bringing on stage two dancers, Charlotte Landreau and Lloyd Mayor, who performed parts of works by Graham which draw from Greek mythology, Night Journey and Errand Into the Maze; Night Journey dramatizes Jocasta in the moment of devastating self-knowledge, Errand Into the Maze has Ariadne encounter the Minotaur. Eilber vividly described the Graham dance technique as one focused on the effortful physicality of contraction and release, coiling; how the body behaves when it experiences intense pleasure or pain. This effortful physicality was brought before our eyes by the dancers themselves in their demonstration. It was an incredible thing to witness. Up close, in an intimate environment.

This week I also took a trip to the University of Toronto Mississauga to speak in the UTM-JHI annual seminar series, this year on Fragments. I spoke about the fragments of Latin verse in the Ciceronian corpus (the topic of my book), as well as on the theory of the “fragment” more abstractly; here’s the handout and the slides.

Speaking at @UofT later today as part of the annual UTM-JHI seminar series, "Fragments of Latin poetry in Cicero." This material is straight from the book I'm writing rn. Here's the handout: https://t.co/EQfxO8Zy7k And the slides: https://t.co/kwlKRFz9rc pic.twitter.com/pLjisMj7kQ

Modern. I find myself with a large appetite for personal essays about the internet. A lot of them are ultimately negative. Famously, there’s Lindy West’s account of the troll who pretended to be her dead father to harass her online; also told in Shrill (2016) and on This American Life. West eventually quit twitter, though not because of that; plus, she has a happy life on instagram. Jia Tolentino’s Trick Mirror (2019) starts with an essay — “The I in the Internet” — describing how the performative construction of the self is pushed to the limits when faced with an ever present, internalized, and usually hostile audience. Not to mention, as Tolentino notes, the fact that internet hostility is deliberately manufactured to make money; we seem not to be drawn so much “to the puddles and blossoms of other people’s curiosity and expertise” (pp4-5) but choose instead to engage in an economy designed to thrive on the heightened emotional state of its users.

Maeve Higgins is more optimistic. In the final essay — “The Golden Record” — of her most recent book, Maeve in America (2018), she describes the phonograph records carried by the Voyager spacecrafts launched in 1977. These 12-inch gold-plated copper disks hold sights and sounds carefully chosen to represent life on earth at that moment by a committee chaired by Carl Sagan. Voyager 1 and 2 have reached interstellar space; the images and sounds on the Golden Record can be played, as Sagan said, “only if there are advanced spacefaring civilizations in interstellar space.” For Higgens, instagram stories, which show videos and images on a feed that disappears after 24h, have something in common with the golden record. Hope, for one thing. Hope that someone will encounter the message and understand it: the golden records are inscribed with instructions on how to play the media contained within. Higgens writes (p239): “Today, with these images I get to share with anyone who cares to look, I am asking the question: Do you understand me now? Here is what I’m trying to tell you.”

An optimistic view of the internet is hard for many reasons. In classics, we have to reckon with the ways toxic online communities use ancient material for malicious ends, as Donna Zuckerberg’s Not All Dead White Men (2018) so vividly describes. We also seem unable to escape the idea so often repeated that social media is inherently superficial, vain, vapid; and that it is these qualities in particular which harm us. The first episode of Broad City season 5 (“Stories”) presents itself as an instagram story, documenting a day in the life of Abbi and Ilana, coopting the forms of the medium to undercut and satirize it. In the last scene, Abbi says: “because we were filming it, it’s not even our ‘story’ anymore.” With these final words (of the premier of the final season), Abbi and Ilana ask their audience to contemplate how a comedy act between two friends, developed out of the sparkling chemistry of their private intimacy, has grown beyond itself into a stage play for a massive audience. Real life performativity is amplified when we make ourselves public: via “publication,” art no longer belongs just to you, and on the internet your image takes part in more than just your own selfhood.

Excerpt. Sara Ahmed 2017: 15-16: “My citation policy has given me more room to attend to those feminists who came before me. Citation is feminist memory. Citation is how we acknowledge our debt to those who came before; those who helped us find our [p16] way when the way was obscured because we deviated from the paths we were told to follow.”

Daily Life. In Toronto the autumn leaves were just nuts! 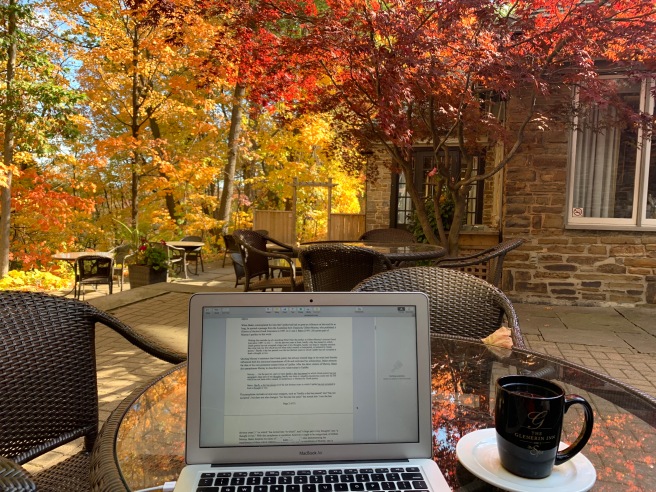